Two-Eyed Seeing is the descriptive label for an important guiding principle for one’s journey while here on Mother Earth. Albert Marshall, Elder (Eskasoni Mi’kmaq First Nation, Cape Breton) offered this principle to Integrative Science and gives voice to the gift in explaining that it refers to learning to see from one eye with the strengths of Indigenous knowledges and ways of knowing, and from the other eye with the strengths of Western (or Eurocentric, conventional, or mainstream) knowledges and ways of knowing … and to using both these eyes together, for the benefit of all.

Two-Eyed Seeing can be further explained as inclusive of the following considerations: 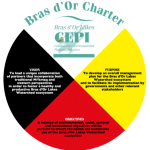 Come Walk With Me...

The Bras d'Or CEPI offers a visionary way forward for maintaining the health of the Bras d'Or Lakes and its people. It is a unique collaboration that includes 4 levels of government, the 5 Mi'kmaq Chiefs of Unama'ki, Youth and Elders.

Learn About The CEPI Structure